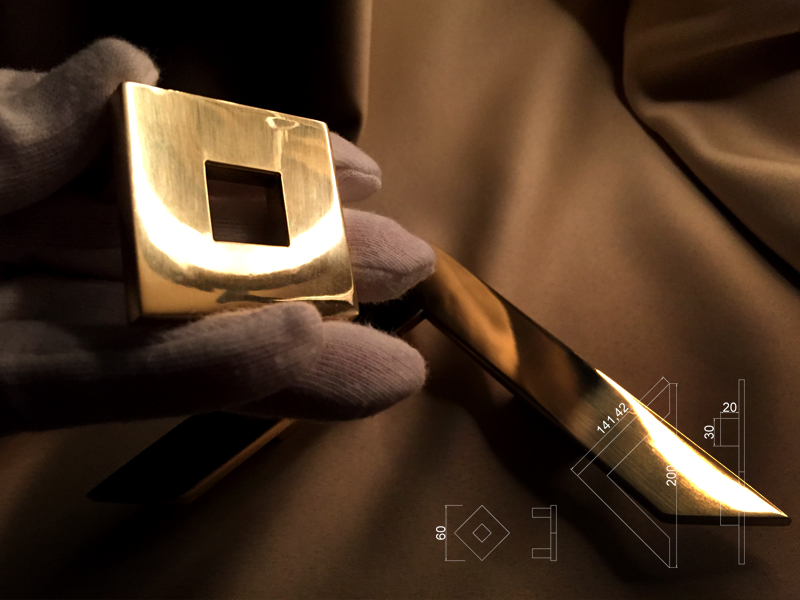 A Short History Of Cabinet Handle

Posted 6 years ago by goodwynlondon in Uncategorized

The history of cabinet handles is highly unusual.

While you may not realise it, hardware is everywhere. You touch it every day and it plays a significant role to keep your home and workspace functional.

Yet remarkably, for a product so universal, there is precious little written about the history of hardware itself, as if the details were lost in time.

Unless we truly understand the past we cannot hope to create for the future: there is no inspiration for creative thought, no heritage to attest nor legacy to build upon. This simply won’t do.

So if you are seeking inspiration, here is a short written history of cabinet hardware, covering its evolution over time, from the 1700s to the present day:

In the early 1700s, architectural hardware was considered simply functional. With knowledge passed down through the generations, local blacksmiths forged handles, hinges and latches from iron with tools and methods that were not much developed from medieval times.

It was only following the industrial revolution that things began to change. Not only was this technological but architectural style begun to change. The grandest Georgian homes of this period featured decorative brass hardware, a symbol of traditional refinement that remains a British taste.

As the industrial revolution spread, other national styles emerged initially in continental Europe followed by a newly independent America with the advent of the Regency Style. The age of architectural hardware was about to blossom.

The Victorian age was a golden period for architectural hardware. In this age of mass production, a new sand casting technique enabled companies to increased production tenfold. Tastes shifted from the conservative to the elaborate with inspiration from every corner of the world and period of human history.

It was in this time that design patents first emerged as companies furiously competed to offer ever more original decorative patterns. Hardware became both ornamental and affordable as professional designers emerged from Adams, Stratford and Brabant in the USA to Dresser, Jones and Eastlake in Britain.

Towards the end of the century, housing styles began to change once more. As modernity beckoned, many sought design inspiration from the past. This was the origin of the Revival styles, which replicated the traditional hardware of times past as mass manufactures for the modern market.

In America, a colonial revival emerged with decorative blacksmithing inspired by the past to celebrate the centennial year. Europeans developed Spanish Colonial and French Norman revival styles while English revival hardware incorporated medieval motifs; traditional ironwork and hand hammered pulls for this most romantic design period.

At the turn of the century, progressive architects were turning away from machine cut detail and extravagant historical styles towards simple, clean and practical design. Influenced by thinkers like William Morris, the hardware of this period was designed ‘known to be useful and believed to be beautiful’.

Preindustrial metals including bronze, brass, copper and iron finished with a rustic, antique effect are typical for hardware of this period. From a design perspective, the emphasis was to bring out the natural beauty of the metal while allowing each article to fulfil its purpose as simply and directly as possible.

The Art Deco movement swept into prominence with the 1925 Paris Exposition des Arts Decoratifs with a profound influence on the architecture and style of the roaring 1920s. From skyscrapers like the Empire State Building to the finest private houses, Art Deco ziggurats and geometric patterns found expression.

Along with the new style came new materials such as Bakelite and Acrylic resin, which caught on quickly with hardware manufacturers and enabled new colourful designs. Yet with the outbreak of war, the Art Deco influence was short lived and never truly went mass-market, perhaps explaining it’s current revival.

The modern age saw architects striving to break from the past with the influence of Schindler, Gropius and Van Der Rohe expressed through utilitarian designs that reflected modern building methods and materials such as poured concrete, which broke decisively with past styles.

From bespoke cabinet handles to custom finishes, the possibilities with contemporary architectural hardware are truly endless. You simply need to know where to look and you will find something to suit any style or budget.

Which brings us right up to the present moment, after over 300 years of cabinet hardware history; it is the designers of the present who hold the key to the future. Who knows what the future will bring?